Inalienable Rights for ALL Children

Unfortunately, many children around the world are being used as pawns in a highly funded, political agenda which is rooted in cultural Marxism but which has it’s tenets in nearly every school board across the nation.

The agenda is pushing the LGBTQP+ lifestyle onto others who have chosen not to participate in it. The larger political agenda does this through “comprehensive” sexual education curriculum from Pre-K and up and through policy changes which give special rights to some students over all the rest.

This page contains factual information (instead of emotional) showing how this political agenda is bullying school boards across the nation into changing their policies to give huge amounts of power to this special interest group over all other students. The information contained here should be a reference for other school districts in Colorado (and other states) to learn from in order to keep their district FREE from the political agenda and one that protects the inalienable rights of all students.

Several members of “Free Counties” were involved in a policy change issue for the school district of Bayfield, Colorado back in 2017 when the school board voted to make an unnecessary addition to the current non-discrimination policy by adding the words “which includes transgender” behind the section for “sexual orientation” as shown below.

The Nondiscrimination policy of school boards and other organizations is meant to be a protective policy for all so that nobody is discriminated against; however, since the Bayfield School Board voted to add the specific wording to the sexual orientation section, they gave political power to that special interest group.

On October 24, 2017, most of the School Board members and the acting Superintendent were interviewed and all of them (even those who voted against the policy) said that state law mandated this policy change but when asked to reference the Colorado Revised Statute, they cannot. This policy change is NOT mandated by Colorado law and the Bayfield School Board members have a responsibility to their constituents to do the research before voting on a policy change that gives special rights to some students over others. The chief counsel of the Colorado Association of School Boards even agrees with us as was referenced by the Durango Herald Article listed at the bottom of this page.

The phrase, “which includes transgender,” is not legally required in the school non-discrimination policy because transgender status is protected regardless, said Jennifer Mueller, chief counsel of the Colorado Association of School Boards.

Here’s how this large political agenda bullied it’s way into the small, rural district of Bayfield, Colorado (and is happening in other counties across the nation in similar manners). The Federal agency of the Office for Civil Rights (OCR) , under the Department of Education, performs periodic audits and when the Bayfield school district received theirs in 2017, they passed it on to the Colorado Association of School Boards (CASB) and asked their attorneys to review it. The OCR findings didn’t even have a mention of “transgender” sexual orientations in their audit (see downloadable file below).

CASB took advantage of the opportunity and gave the school board their templates for changing this nondiscrimination policy. The Bayfield School Board failed to thoroughly research the issue and obviously does not realize that CASB is in partnership with the largest gay lobby in the state – “One Colorado.”

CASB has joined One Colorado, along with the Colorado Association of School Executives (CASE), the Colorado Education Association (CEA) and the American Federation of Teachers – Colorado (AFT)…and pledged to work with these partners to provide education and resources to our public schools to help our schools improve school culture, thereby lessening the occurrence of bullying and harassment. In the end, schools that foster a positive environment where kids feel safe will result in kids coming to school, staying in school, and continuing to learn…

So, taxpayer $ goes to the district to pay for a membership in CASB (over $10,000 per year for the Bayfield School District – see file below for the 2018-2019 school year which was obtained under the Colorado Open Records Act. $9,377 for annual dues and $1,900 for Online policy system) where this political agenda is being pushed down from to discriminate against kids who are outside of the transgender sexual orientation.


Here are the articles from the Durango Herald in regards to some recent meetings on the topic. “Free Counties” facilitated the meeting where the protesters showed up even though the DH failed to report on that fact.

During a recent meeting of Bayfield Parents, Free Counties pointed out how “(The policy) gives huge amounts of power to that special group” (i.e. transgenders). The Durango Herald (DH) article explained the response of the disruptive protesters when they screamed, “What power? Fifty percent of them are killing themselves,” said gay-rights advocate, Jennifer Stucka-Benally” but the DH reporter failed to explain how FC followed up by explaining that we are VERY concerned about the mental disorder that transgenders have and how most of the political agenda is trying to stop counseling services for them which should be a concern. Of course, the heckler was pushing the agenda so much that she didn’t want to even hear about that reality. Here is the Director of “Colorado Family Action” explaining how horrible it is for these gender confused children that the politicians are pushing for a ban on “conversion therapy.”

Free Counties is a citizen’s activist group that gives power back to the people at their local levels and is now helping with this issue in several counties, especially across Colorado. If you would like more information in regards to understanding the political agenda behind these unfair policy changes, please contact us. 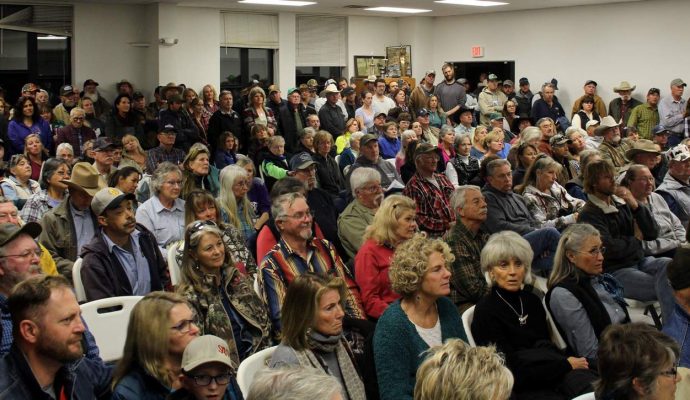