"We the People" of Bayfield, Colorado want our town back!! 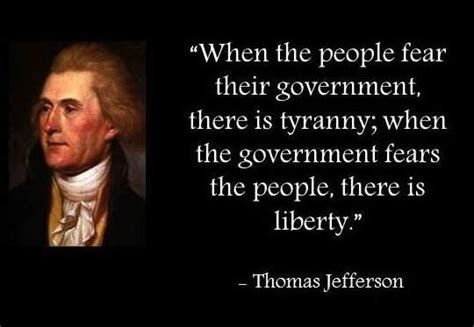 Let’s unite to END the Emergency! Bayfield has not had any “emergency” in the last year and the local government is infringing on the private property rights of businesses/individuals. This will crush our economy. Please read/sign the petition (webpage or paper format around the area) to let your voice be heard showing how we care about our small, rural town and don’t want to play politics with a tyrannical Governor and his governmental agencies. We want to save our town!

It is important for the public & elected officials to understand that we are doing this to try and EMPOWER the Town Board to keep decisions at the local level instead of accepting the bribes from the state/federal levels of government.

Bayfield, Colorado is a “statutory” town and, therefore, the town council has municipal powers to operate as a self-government without receiving dictations from the state/federal governments but the only way they can do that is if they stop taking the bribes with the strings attached.

There is no legislative bill or act that has been passed at the state level that requires a “state of emergency” and this was solely done at the local level. There has clearly been no emergency in Bayfield (see our webpage with links to the local health department where you can do the math of the numbers yourselves) so the people are asking our local officials to put an end to the “state of emergency.” We need to unite and do this for the sake of the economy and to protect the inalienable rights of the people, especially private property rights.

Please go to www.freebayfield.com to sign the petition where the appendices clearly show how the local health department has only issued “advisory” suggestions, NOT codified law. All signatures are kept confidential but we ask that you own some property (doesn’t have to be land) in 81122 zip code to sign it.

“We the People” of Bayfield are working hard to empower the Board of Trustees to keep decisions LOCAL, to uphold their oath that they took to the SUPREME law of our state (i.e., the Colorado Constitution, specifically Article 2 which is the Colorado Bill of Rights), and to protect the inalienable rights of all citizens in our local area.

WE THE PEOPLE of the town of Bayfield, Colorado, hereby declare that:

There is no threat of an epidemic that overwhelms the resources of Colorado and therefore, according to the Colorado Public Safety Statute, §24-33.5-703, there are no grounds for a state of emergency in the state. And where a state of emergency was declared by the Bayfield Town Council on March 24, 2020 and in almost a year’s time, there has not been any emergency in the town due to an epidemic or any other such threats.

According to the Colorado Public Safety Statute, §24-33.5-703: a state of emergency can only be called if there is an occurrence or imminent threat that overwhelms the current resources of the state. Furthermore, the state of emergency should be terminated at the earliest possible date and order restored.

A state of emergency related to public health can only be declared if the threat overwhelms the response capabilities of Colorado’s health care practitioners. Thousands of healthcare workers are being furloughed in Colorado, so there is zero evidence of grounds for this state of emergency based on public health. There is no “threat that overwhelms the current resources of the state” since the covid-related deaths (with inflated numbers) are far fewer than the average seasonal flu.

Covid-19 cannot lawfully be classified as an “epidemic.” An epidemic is when there are disproportionately large numbers experiencing an outbreak of a disease. There is no evidence of this in Colorado.

WE THE PEOPLE of Bayfield have already given prior notice to the Town Council via petition1 explaining that we expected you to make decisions that protected all of our rights according to the Colorado Bill of Rights (Article 2 of the state Constitution); yet, this did not happen as businesses were illegally closed down and the private property rights of businesses were infringed upon by threats from the Bayfield Marshall for enforcement of something that is not a law but only an “advisory” suggestion from the local health department2.

WHEREAS, the Governor’s emergency orders, as enforced by the state agencies, deny the rights of the people to peaceably assemble in private places of business, in their own family gatherings, in churches, etc. to engage in constitutionally protected activities; and where these inalienable rights are protected by the Colorado Constitution (Article II Bill of Rights, Sections 4 & 10).

WHEREAS, the citizens of Bayfield are aware of their own underlying health risk factors better than the Governor and health departments and they are free to seek their own health remedies outside of government intervention;

WHEREAS, in the historical development of the state of Colorado, the 2nd item that was defined long before the government was formed and only after the state boundaries were drawn is how “all government, of right, originates from the people,” and “is founded upon their will only” (Article II Bill of Rights, Section 1), it should be clear that you work for the people of Bayfield, not the other way around and that your authority originates from the people, not the local health department.

WHEREAS, a state of emergency that operates in perpetuity becomes a state of tyranny;

WE THE PEOPLE of Bayfield hereby proclaim and affirm that the Bayfield Town Council should vote IMMEDIATELY to terminate the “declaration of emergency” that was declared on March 24, 2020 and restore order to protect the rights of the citizens. Also, since a new position was created for the purpose of the state of emergency (which we have shown has never been applicable to Bayfield), we ask for an IMMEDIATE termination of the “Economic Recovery Coordinator” position and a restoration of the taxpayer dollars of the citizens. We also ask that you adopt the proposed “Resolution to Protect Citizen’s Private Property Rights3” according to the Colorado Bill of Rights (i.e., Article 2 of the Colorado Constitution).

2: See Appendix 2: Proof of the local health department’s “Advisory” warning that is not codified law

*Town of Monument Resolution No. 08-2021, unanimously passed showing how the limitations imposed upon the freedoms of their citizens by the actions of the Governor and CDPHE (and, therefore, all local health departments underneath it) are “unconstitutional” (i.e., illegal). https://monumenttownco.documents-on-demand.com/document/366a1e4d-8354-eb11-a324-000c29a59557/Resolution%20No.%2008-2021%20-%20condemning%20unconstitutional%20limitations.PDF

*Douglas County Resolution R-021-023, unanimously passed showing how the Colorado state restrictions “continue to unreasonably infringe on the Constitutional First Amendment rights as well as life, liberty, and property interests” of businesses and citizens and how their county government will “not be involved in such unconstitutional enforcement efforts.” https://douglascountyco.iqm2.com/Citizens/Detail_LegiFile.aspx?Frame=&MeetingID=2891&MediaPosition=&ID=6731&CssClass=

During this difficult time, we hope this message finds you and your family well but I would like to remind you of the sections of the Colorado Constitution (i.e., Supreme Law of the state) which protect my property rights and I expect you to make decisions that protect ALL of my rights.

Article 2, Section 1 clearly states, “All political power is vested in and derived from the people; all government, of right, originates from the people, is founded upon their will only, and is instituted solely for the good of the whole.”

Section 3 says, “All persons have certain natural, essential and inalienable rights, among which may be reckoned the right of enjoying and defending their lives and liberties; of acquiring, possessing and protecting property; and of seeking and obtaining their safety and happiness.”

Section 7 describes how, “The people shall be secure in their persons, papers, homes and effects, from unreasonable searches and seizures; and no warrant to search any place or seize any person or things shall issue without describing the place to be searched, or the person or thing to be seized, as near as may be, nor without probable cause, supported by oath or affirmation reduced to writing.”

Section 15 says, “whenever an attempt is made to take private property for a use alleged to be public, the question whether the contemplated use be really public shall be a judicial question, and determined as such without regard to any legislative assertion that the use is public.”

My property also includes my body and my thoughts as defined in the section of the security of my person (7), so in being clear with the Supreme Law of our state, please remember that you have no authority to shut down my business (sections 14 & 15) nor to tell me what to do with my own body (including forced mask wearing, contact tracing, nor vaccines) without due process of the law.

The history of our great state and the fact that Article 2, Section 1 states how “all political power is vested in the people” should be enough evidence to remind you of how your authority comes from the people, NOT public health agencies. The draconian sanctions that are being placed onto the people by health agencies such as San Juan Basin Health (SJBH) and the Colorado Department of Public Health and Environment (CDPHE), along with the illegal actions from the Governor, without public notice, hearing, nor appeals is nothing short of a criminal action. Labels such as “essential” and “non-essential” as deemed by such agencies are arbitrary and capricious, at best…and criminal, at worst.

Why are you handing your elected authority over to a non-profit agency that has only issued an “advisory” for these draconian sanctions? Are you sure that you want to lose your authority in that manner while breaking the law?

Thank you for your time,
Concerned Citizen 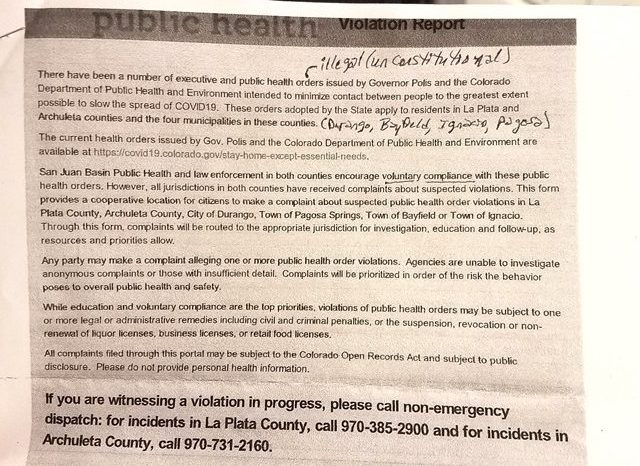 We, the undersigned elected officials of Bayfield, Colorado who are charged with upholding and protecting the U.S. and state Constitutions do hereby agree to the following:

Recognizing these basic legal facts, we agree that all citizen’s private property rights in the Bayfield area shall be placed at the highest priority of consideration during planning and passage of any tax increases, ordinances, planning, zoning, and/or agreements with any public-private partnerships (P3s) as well as any non-governmental agency (NGO); and,

In the event that any part of planning or recommendations resulting from the process and passage of any tax increase, ordinance, planning, zoning, and agreements with any P3s and/or NGOs, shall result in potentially negative impact on any private property rights of the citizens (including restrictions on use, enjoyment, disposal or the value of their property) the property owners shall:

The Colorado Constitution was written in 1876 to protect the citizen’s property rights when it states: “All persons have certain natural, essential and inalienable rights among which may be reckoned the right of enjoying and defending their lives and liberties; of acquiring, possessing, and protecting property; and of seeking and obtaining their safety and happiness.” (Article II Bill of Rights, Section 3)

Affected property owners shall be notified of the potential impairment to their rights and their individual written approval required before engaging in any of the following:

In order to abide by the SUPREME law of the state of Colorado in making private property rights the highest priority, no government representatives or their assigned planning agents, should be able to come onto any private property for any planning purpose without the written consent of the owner nor should they be able to force any individuals to do things with their own person or thoughts that are against their wishes.

If the Council/Planners determine it is necessary to move forward with plans that will affect the property owner financially, such as through zoning changes, use restrictions, or “takings” by Eminent Domain, the Council will compensate the property owner’s fair market loss, at the value of the property as it stands prior to the damaging plan/policy.